"Beyond the boundary of Human Resource Development (HRD),


“Dr. Jacobs is the world’s greatest scholar providing not only the soundest concepts and principles,

"Dr. Jacobs is the greatest living authority on the workplace learning and structured on-the-job training.

Ronald L. Jacobs, Ph.D. is principal of RL Jacobs and Associates and is professor of human resource development, at the University of Illinois at Urbana-Champaign. Ron has written over 100 journal articles and book chapters, and has authored or edited six books that address a range of topics in human resource development. Ron is an emeritus professor at the Ohio State University.

In 1994, Ron received the instructional technology research award from the American Society for Training and Development. In 1995, the Academy of Human Resource Development honored Ron for his scholarly contributions to the human resource development field. From 1998-2001, Ron served as editor of Human Resource Development Quarterly, the major scholarly research journal of the human resource development field and is one of the SSCI listed journals in the HRD field. Ron served on the ASTD (ATD) advisory board of the workplace learning and performance certification institute. Currently, Ron serves as president of the Academy of Human Resource Development. In November 2013, Ron was inducted in the International Adult and Continuing Education (IACE) Hall of Fame for his contributions to workplace learning and performance.

Among his contributions to the HRD field, Ron is particularly known for his research and consulting related to structured on-the-job training (S-OJT). Ron first introduced this training approach to the HRD literature in 1987. He is the author of Structured On-the-Job Training: Unleashing Employee Expertise in the Workplace (Berrett-Koehler, 2nd edition), which has become the standard guide to help organizations and nations implement this training approach.

The book has been translated into Chinese-complex, Chinese-simplified, Korean, and Arabic. Much of Ron’s research on this topic has been on determining the ROI of using S-OJT. This information has proven critical for making more informed training decisions.

Since 1980, Ron has been responsible for the graduate training of over 300 HRD professionals. More than 30 of his Ph.D. graduates now teach HRD and HRM-related subjects in universities globally. Ron has been an invited professor at numerous international universities, including the University of Utrecht, the Netherlands; he was the Shaw Distinguished Professor of Human Resource Management at Nanyang University, Singapore; and, distinguished professor of education at Huazhong University in Wuhan, China.

Ron has extensive consulting experience in global organizations and government agencies, including General Motors, KLM Airlines, Abbott Laboratories, Kenworth Trucks, Seagate, Morton Salt, Rohm and Haas, Kuwait National Petroleum Company, Biomet, Honda, Hyundai Motors, and Huawei Telecommunications, among others.  Ron designed and helped implement an extensive development system featuring the use of S-OJT for new-hire engineers for the Kuwait National Petroleum Company. Ron’s work on S-OJT has influenced national policy makers in Singapore, which in 1997 implemented the OJT 2000 initiative through its Productivity Standards Board and the Institute for Technical Education. Ron’s work has also influenced the policies of the Ministry of Employment and Labor, Republic of South Korea and in the national Doroob initiative in Saudi Arabia.

Common across Ron’s consulting projects is developing workplace performance systems that respond to changing demands on employee competence. Ron purposely integrates his projects into his scholarship and teaching through partnership research.

Ron enjoys sailing, golfing, and spending time with his wife, Marsha, at their summer home on Lake Erie. 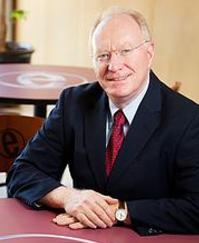